Red-tailed hawks usually hunt in open areas from a perch on a pole or by soaring in circles over a likely field. They can sometimes be seen among a group of vultures. It's not clear whether this is a clever strategy to fool prey that would be on the lookout for a hawk but might ignore vultures. Or maybe it's just a hawk taking advantage of the vulture's ability to find the best updrafts to ride. In any case, you can pick out the hawk by her flat wings and steady flight. The vultures wings form a "V" and they rock more than the hawk.

Red-tailed hawks typically hunt small mammals from mice to squirrels and rabbits but also take snakes and birds, like pigeons, caught on the ground. They're often called chicken hawks but a full sized chicken is a bit too big for a red-tail. That being said, as a rehabilitator, I did pick up a hawk that a farmer captured after it killed one of his chickens. But that was a very young, emaciated bird desperate for food and not typical of most red-tails. 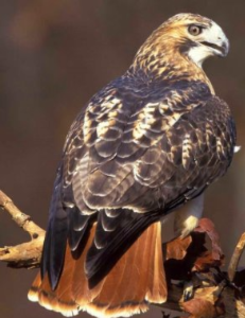 Red-tailed hawks are large, sturdy raptors with a short tails, broad secondary flight feathers for soaring and strong feet for capturing prey. Their common name comes from the distinctive brick red tail that makes most of them easy to identify in the wild. Red-tailed hawks in the VA, MD & DC area are generally a warm brown on top, light on the underwing, and light to rufous on the breast and leg.  There's no difference in plumage between males and females. But these birds come in a variety of color morphs that can occasionally make identification challenging depending on subspecies and geographic location. Juvenile red-tails, in their first year of life, don't have a red tail at all. Instead they have a brown barred tail, slightly longer than an adult's, until their second year. Among adults of different subspecies, the intensity of the tail color varies from very pale orange to gray or brown. Even within a local population, variations can be striking which often makes it possible to recognize individuals - something not always easy with other raptors.

So with all this variation, how can we positively identify a red-tailed hawk if it doesn't have a red tail? One feature common to almost all red-tails is the presence of a dark "belly band" that looks a little like a belt on the lower breast. On some individuals this is very pronounced and less so on others. It's easily seen when the bird is perched or soaring. The most definitive feature is a dark mark along the patagium, the leading edge of wing extending from the shoulder to about mid-wing. All red-tailed hawks have this mark but it's only visible when the wings are spread as when the bird is soaring. 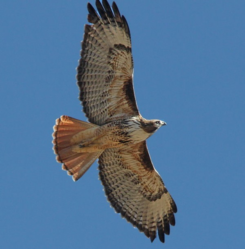 The Red-tailed hawk is the 2nd largest hawk in America after the Ferruginous Hawk.

Red-tailed hawks are popular falconry birds. Most apprentice falconers in the United States begin with a red-tailed hawk. Hungry red-tails are very food motivated which makes training relatively easy and, once trained, they are reliable and unlikely to be lost. Training a hawk requires precise weight management. The falconer has to balance keeping the hawk hungry enough to be responsive to commands but not so hungry that the bird's health is affected or her energy diminished. A red-tailed hawk is large enough to provide some leeway in weight and durable enough to withstand the mistakes a novice falconer mike make.

Only passage birds (hatch year birds) can be taken from the wild. Many falconers will trap a passage red-tail, train her, work with her through the hunting season and release her in the spring. Despite working intensely with a human hunting partner for several months, she soon returns to her wild ways - a more confident and skilled hunter. Her time with the falconer may well have saved her life. Most raptors don't make it through their first winter due to starvation or predation. By providing shelter and food, the falconer has given her a chance to develop her skills and strength in safety and ensured her  survival through the most difficult time of her life.

North America into Mexico and across the Carribbean. Rarely in Bermuda and Newfoundland. 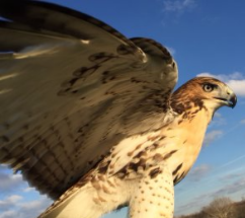