Distribution
Common throughout the eastern United States into Mexico

Red-shouldered hawks are the most colorful and noisiest hawks in the Virginia, Maryland, and DC area. While they are hawks of the woodlands and forest edges, they are frequently seen perched on power lines along roads in every environment from farmland to city neighborhoods.

Adult red-shoudered hawks have black and white backs and upper wings that look almost like a checkerboard in flight. They have strongly banded black and white tails. Their breasts are a warm peach to russet color with deeper russet along the shoulders - giving them their name. Juvenile hawks are less colorful, mostly brown above with a brown striped tail and buff and brown breast.

Their color and choice of perching sites makes red-shouldered hawks very easy to see but their most distinctive feature is their voice. Unlike red-tailed or cooper's hawks that vocalize only occassionally, red-shouldered hawks like to be heard. If there are red-shouldered hawks nearby, you're likely to hear their piercing kee-awww call before you see them - and you'll hear it frequently. During nesting and fledging season, you'll hear the entire family calling to each other. Blue jays will sometimes imitate the call but with less strength and persistence than the hawks.

In flight, adults and juveniles show tansluscent crescents, like windows, near the outer edge of their wings.

Look for red-shouldered hawk nests high in a sturdy fork of a deciduos tree near water. 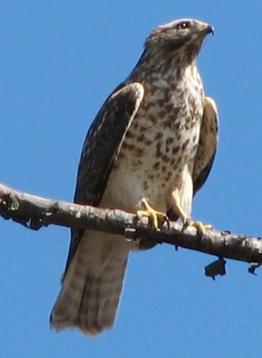 Red-shouldered hawks lay 2 to 5 eggs - one every couple of days. The female begins incubating the eggs as soon as the first is laid so they hatch every couple of days in the order they were laid. Because nestlings grow very fast, there can be a significant size and behavior difference between the first and last hatched. Sadly this sometimes means older nestlings push younger ones out of the nest - by accident or intentionally to reduce competition for food.

A nestling on the ground is vulnerable to many ground based predators like cats, dogs and raccoons. If the nestling is lucky someone will pick it up and bring it to a wildlife rehabilitator. If the nestling isn't injured, he can be returned to the nest tree to be raised by his parents. Putting the nestling back with his siblings could just get him kicked out again and he might not be as lucky a second time. Human activity too close to the nest could panic his siblings and make them leave the nest prematurely. The best solution is usually to make a new nest for the rescued baby by threading sticks and leaves through the holes in a laundry basket, attaching sticks for perching to the top of the basket and filling it with leaves or pine needles. The new nest can be securely mounted in the nest tree and nestling placed in it. The parents will respond to his begging calls and continue to feed and protect him. Of course this needs to be done safely and under the guidance of someone experienced with re-nesting raptors.

Smaller than red-tailed hawks and larger than broad winged hawks

Red-shouldered hawks typically hunt small mammals, frogs, amphibians and snakes but, like many birds of prey, they are opportunistic - willing to take whatever food is readily available. These hawks are known to snatch fish from a pond and take advantage of a suet feeder during the winter. We have observed red-shouldered hawks that preferred taking birds, including crows that are comparable to them in size. We've also seen them feasting unhurriedly on large insects in the woods, moving gracefully from branch to ground and back. 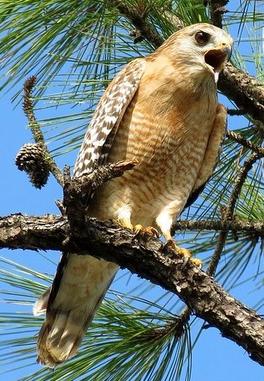