Why focus on barn owls and kestrels?

The project is modeled on work done by Roger Jones. Roger is well known for his work with kestrels since the 1970s and for publication of the Kestrel Karetakers newsletter. A number of Roger's kestrel boxes are still in use in Eastern Loudoun County. In 2007, Roger and his associates turned their attention to barn owls. They began by installing six barn owl boxes in abandoned silos and unused barns. In the beginning they made boxes from old apple crates, an old trunk, used pine boards, and scrap plywood. The boxes always had two chambers, one for nesting and one for roosting. If they were open to the elements, as in a silo without a roof, the boxes were built with a top cover. As the project saw success, they added better boxes made from new plywood. Over the years, Roger has installed 19 barn owl boxes. The boxes were monitored and some were relocated because they weren’t successful. Others were lost when a barn or silo was torn down. In 2009, only two years after beginning the project, Roger and his team banded 31 young owls. Between 2009 and 2015 they banded comparable numbers of owls of all ages ranging from hatchlings to those ready to fledge. They were even lucky enough to band several adults on the nest. We hope for similar success.

The American Kestrel (Falco sparverius) is a beautiful little falcon native to the open rolling countryside of Northern Virginia. These colorful hunters, about the size of a robin, are usually seen perched on power lines where you might mistake them for a common songbird. But if you look closely, you’ll see that despite their diminutive size they possess all of the falcon characteristics: large dark eyes, dark stripes down the side of the face, long pointed wings that cross at the back, long slender toes, and a very sharp beak with a small notch. If the bird is perched you may also notice frequent head and tail bobbing. In flight you may see them soaring over an open field or kiting – flying into the wind at the speed of the wind so they appear to hover.

Among local raptors, screech owls and barred owls will also us man-made nest boxes. We haven't focused on these because their populations are stable or growing. But putting up a nest box is still a great way to invite them into your neighborhood and there is evidence that owls nesting in boxes are more successful and fledge more young than those in natural cavities. 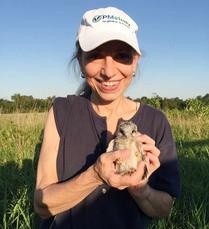 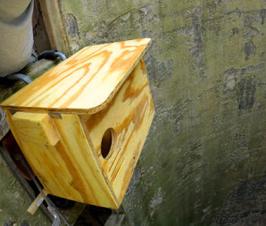 Barn Owls (Tyto alba) have suffered a similar fate. These birds with pale heart shaped faces, long lanky legs, and eerie screams and hisses are truly unique among all other owls. There is nothing like the sight of this ghostly bird gliding silently through the night sky or peering down from the top of a silo. Barn owls hunt by flying low over open fields and require a healthy prey population. A single brood can consume more than 3,000 mice and barn owls may raise up to three broods in a year. 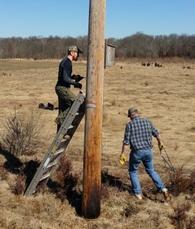 Barn owls prefer low lying open grasslands, meadows and marshes but agricultural fields and urban/suburban areas are acceptable if there are open spaces nearby with a sufficient population of mice and voles to feed a hungry barn owl family. We will install the boxes in unused or rarely used silos, barns or similar structures. These boxes are significantly larger, heavier, and more challenging to install than kestrel boxes. The boxes will be monitored throughout the nesting season by observing adult owls around the box at dusk and during the early evening and the presence of debris around the box. As with the kestrels, young barn owls will be banded if possible.

Barn Owls are widely distributed with active populations on all continents except Antarctica. Despite this healthy worldwide presence, many areas have experienced a precipitous decline. Once common in our area, Barn Owls are now rare due, in part, to changes in land use. Removal of old trees with large cavities and demolition of barns and silos have left these owls with few safe nesting sites in suitable habitats.

What about other raptors?

For 200 years from the mid-18th century through the early 1960s, most of Northern Virginia's land was in agricultural use. During that time, American Kestrels and Barn Owls thrived in the grasslands, meadows, and stands of old trees. They made good use of fallow fields, barns and silos and the abundance of small prey they attracted. After 1960 Northern Virginia's human population began to grow dramatically and much of what was once farmland is now suburban housing with its associated commercial and industrial services. This change in habitat and loss of nesting sites has displaced these beautiful raptors. The good news is that we can do something to reverse the trend by building, installing and monitoring properly designed nest boxes in appropriate habitat. The Banshee Reeks Chapter of the Virginia Master Naturalists has begun a multi-year project led by Liz Dennison to do just that and everyone is invited to participate. 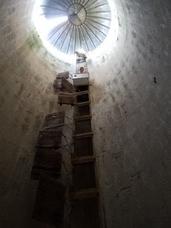 The male kestrel has slate-blue wing coverts, a bright rufous back, and tawny breast with black spots. His tail is rufous with a broad black terminal band and white tip. The underside of his wing is light with contrasting black barring. The slightly larger female is less colorful with dark bars over reddish brown wing coverts and a cream colored breast streaked with reddish brown. Her tail is reddish brown with a dark terminal band and several central bands. The underside of her wing shows less contrast than the male.

There is still plenty of time to get involved and many ways to participate:

For more information contact Liz Dennison directly at 703-309-2961 or by email at Liz@Dennison.bz. We can provide plans for building boxes, deliver completed boxes ready for installation, assist you in selecting a site and installing the box, and help you monitor and report progress. Permits are not required to install and passively monitor the boxes but it is strictly illegal to disturb an active nest or handle the birds without a banding permit.

This is a project for patient people. It may take several years for kestrels or barn owls to find and nest in the boxes. But the sight of a ghostly owl gliding silently through the night sky or a kestrel kiting on a spring breeze is worth the wait.

Although kestrels are possibly the most common diurnal raptor in North America, their population has shown a long term decline in our area and throughout the Northeast amounting, by some estimates, to a cumulative loss of about 48%. Although there are several contributing factors, one of the most significant is a growing scarcity of nest sites. Kestrels are cavity nesters, raising their young in natural tree hollows or crevices and hunting for voles, large insects, and small birds over open fields. Housing and commercial development have overtaken many acres of woodland, meadow and farmland removing the standing dead trees, farm buildings and fields that these birds depend on.