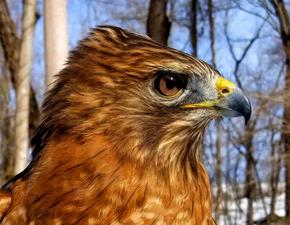 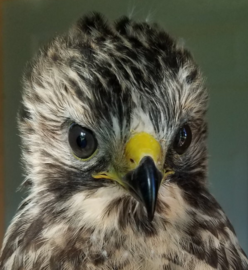 Little Red is a Red-Shouldered Hawk. As a nestling, he was attacked by a predator - possibly an owl, larger hawk or even one of his siblings. He has recovered from his injuries except for permanent damage that left him blind in his left eye. Hawks need good vision in both eyes to survive in the wild so he can't be released.  Little Red officially joined the Secret Garden Flock as a juvenile (hatch year) bird on August 23, 2017.

Like most hawks, his juvenile plumage – the plumage for his first year of life – was very different from his adult plumage. Click through the pictures on the left to see his transition from a mottled brown fledgling, to mismatched teenager, and finally to strikingly beautiful adult. Why this dramatic change? It’s possible that the juvenile plumage gives hawks some protection after they fledge. Young birds move through territories already occupied by Red-Shouldered Hawks as they try to find their own place in the world. Their feathers may be a signal to adults that they are not a threat and should be allowed to pass unchallenged.

Red-shouldered hawks are very vocal and Little Red is no exception. He makes his presence known with his loud kee-ahh call - usually repeated many times. I think everyone within a few miles can hear him. He has certainly attracted the attention of a local pair of adult red-shoulders who return his call and circle over his enclosure. As an education ambassador for his species, I'm sure he'll have a lot to say!