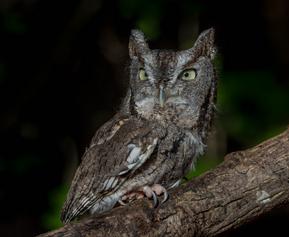 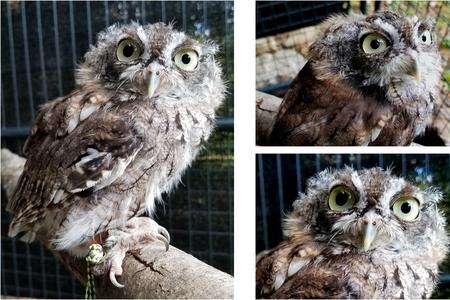 Kvosir is an adult Eastern Screech Owl. He isn't a baby. He's a full grown owl - just a very small one. Like many owls, Kvosir was hit by a car. He was found along the side of the road and brought to Owl Moon Raptor Center by some very kind people who saved his life. Kvosir healed well from most of his injuries and is now very healthy. He's fully flighted and, even though he's very small, he has the attitude of a tiger. But sadly his eyes were badly damaged. Although they look perfect, our veterinary ophthalmologist  tells us his retinas are badly scarred and he doesn't see well enough to return to the wild. Kvosir came to the Secret Garden on May 1, 2018 and we are thrilled to have him as part of our team of Wildlife Ambassadors.

Kvosir is named for a figure in Norse mythology who was very wise and traveled the world teaching and spreading knowledge. As a Wildlife Ambassador, Kvosir will help us teach people about screech owls and many of our other wild neighbors. But he is a very tiny owl for such a big name. So, around the Secret Garden, we call him Vos. You can too!

Each summer, most birds drop their old feathers that have become faded, worn or broken over the year and grow new ones. Birds need good feathers to fly well, find mates and keep warm in the winter. Most birds drop two feathers at a time, one from each side so they are always symmetrical. Some birds, like geese, loose many feathers at once and are unable to fly until the new ones grow in. Screech owls just look like funny little old men for a few weeks. We think it's very cute! 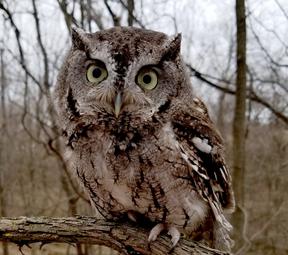