Pippin was found wandering the streets of Washington DC, weak, hungry, and not flying away when approached. He was picked up by a kind person and brought to City Wildlife for care. City Wildlife didn’t find anything wrong with him and transferred him to Owl Moon Raptor Center for flight conditioning and live prey testing before release back to the wild. But his behavior was obviously not normal. Pippin showed no fear of people. He flew to the heads and shoulders of volunteers. He flew to us for food and ate calmly while perched on our hands. And he begged loudly whenever we entered the room. All of these are imprint behaviors.

We don’t know how Pippin became a human imprint. He was well beyond the imprint stage when he arrived at City Wildlife, so someone must have found him as a nestling and tried to raise him. Doing that, deprived him of the life he should be living in the wild.

This is Pippin. He is an American kestrel (Falco sparverius), a small falcon. He may not be as big or as fast as a peregrine, but he has all of the falcon characteristics, long pointed wings that cross in the back, a dark stripe from his eyes to his chin, very dark eyes, and long skinny toes. Like most falcons, he is very vocal. There is no need to play a kestrel call at our programs. Pippin will happily talk to everyone! We know Pippin is a male because of the beautiful blue color on his wings. The wings of female American kestrels are brown, but they are equally beautiful.

Wonderful video by the Cornell Lab of Ornithology 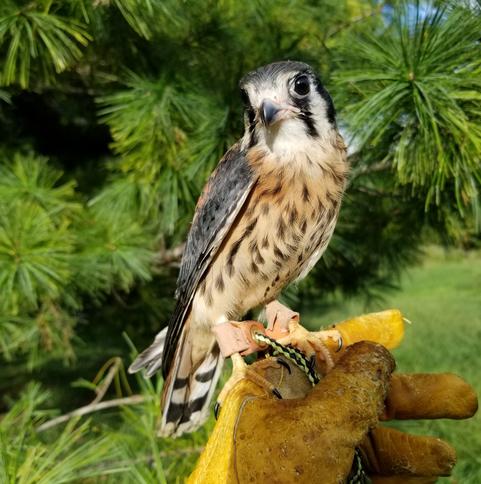 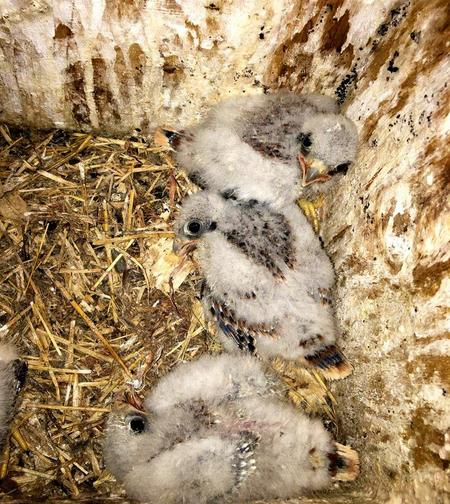 Pippin was hatched in the spring of 2021 and is perfectly healthy. But he is not releasable because he is a human imprint. The Wildlife Center of Virginia explains that “imprinting is a form of learning in which an animal gains its sense of species identification. Birds do not automatically know what they are when they hatch – they visually imprint on their parents during a critical period of development. After imprinting, they will identify with that species for life.” Imprinting takes place during a very specific time in a bird’s development and is not reversible. Imprinted birds are not releasable to the wild because they have not learned how to interact appropriately with their own species or with humans.

Liz Dennison releasing an American kestrel that recovered from a broken wing.

Although we wish Pippin could have been released, we are very happy to welcome him to the Secret Garden Flock. He is our first falcon! And he is one of the species experiencing a sharp decline in our region due, primarily, to habitat loss. American kestrels thrive in the same habitat as barn owls – open fields, meadows, pastures, and marshes where they hunt mice and voles along with insects and birds they catch on the wing. They prefer to nest in small holes in isolated trees or along the edge of fields.

Much of that habitat has been lost to residential and commercial development and reforestation of farmland. Several organizations in the DMV are putting up kestrel nest boxes to try to reverse the decline and it seems to be working.

We chose the name Pippin because it means "awe inspiring". And it is also the nickname for the more formal name, Peregrine. We think it suits this awesome little falcon very well! 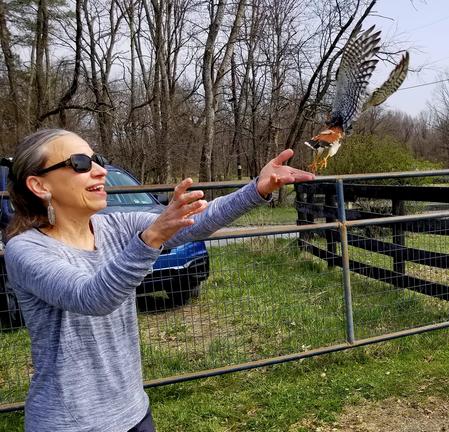 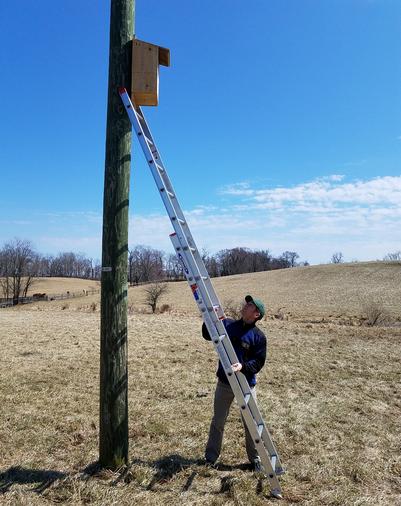